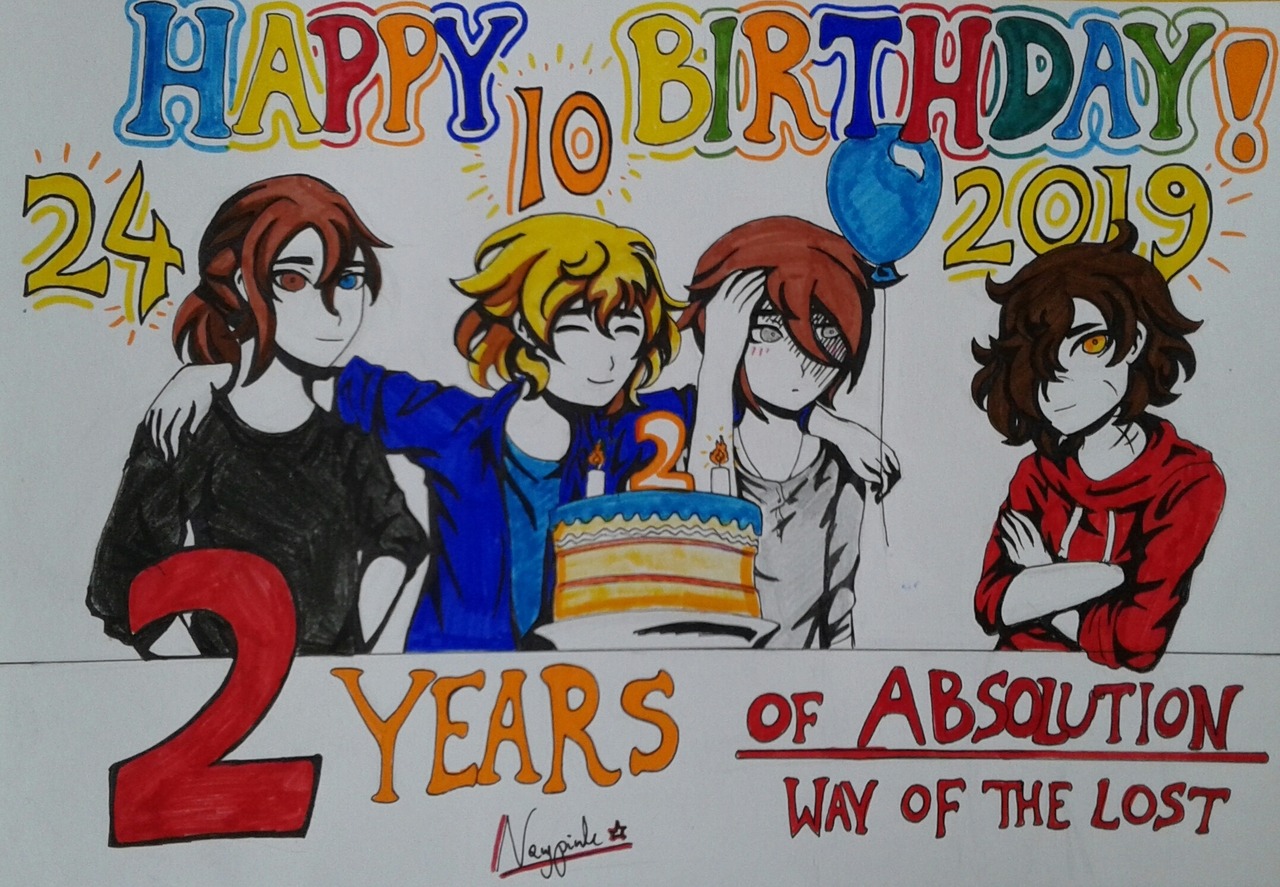 As of today, this game has been in development for two years

"What do you mean, two years?", one could ask "The demo was released less than half a year ago!". And you're right, the demo came pretty late, but you can read my reasoning behind it in this post I made after releasing the demo: "What's going on with the development?"

Either way, this game's active development took a long time to begin. I began making assets and actually writing the game in May of 2018, so over half a year after the game was first pitched.

The short answer is: nothing, really.

"Absolution"'s development began when I called my friend about an idea for a game I had: a dark otome game set in a mental hospital, where you take on the role of a psychiatrist (it later changed to a psychologist). We were both very enthusiastic about the idea, but my friend didn't think I would actually start making the game - she's still one of my testers, but is no longer involved with making the game. However, we spent the first few months of development brainstorming ideas for the characters and basic plots - we would just throw ideas around and try to fit them into a coherent storyline. And it was a mess at first - a lot of things stayed, but some had to be discarded.

Eventually, she didn't like my version of the game's main storyline (the events that happen on each of the routes), and who Dr. Sharpe, a character she proposed for the game, ended up becoming when the plot became slightly more polished. All things considered, we had slightly different visions of the game. In the end, due to real life difficulties we didn't talk for about half a year - when I showed her an early demo of the game afterwards, she was shook by the jump from early concept work to a stable (but still very much unfinished) build of the first week.

That said, I don't have the exact date of the phone call that started it all - I assume it was around the end of October or the beginning of November.

The 24th of October is Dr. Hart's birthday - I realized later on that the date is very close to when the development of the game began, so it became an official anniversary for the game (2 and 4 correspond to the main character's color scheme and 10 corresponds to her general "vibe" for me, the way I pick birthdays for my characters is quite a strange process - you can hear Michael comment on it during your fourth session with him).

What did the game look like a year ago?

I'm fortunate enough to have dug up a very old build of the game from almost exactly a year ago - it was sent to a friend of mine in the later half of September, 2018. I can assume nothing all that major happened in a month from then (the game's development was just starting to pick up its pace back then), I can quite accurately describe what the game looked like a year ago.

I remember struggling with naming this game for the longest time. So you can imagine the main menu looking quite awkward without any title on it. I referred to this game as "the otome" for about a year and a half. Still, I feel it was the right choice. If I picked a working title at the very beginning, it might not have been very accurate, and there's a chance I wouldn't be willing to change a title I was already used to.

Other than the game, Charlie and two of Tom's alters were unnamed. They went by placeholder names for a very long time. 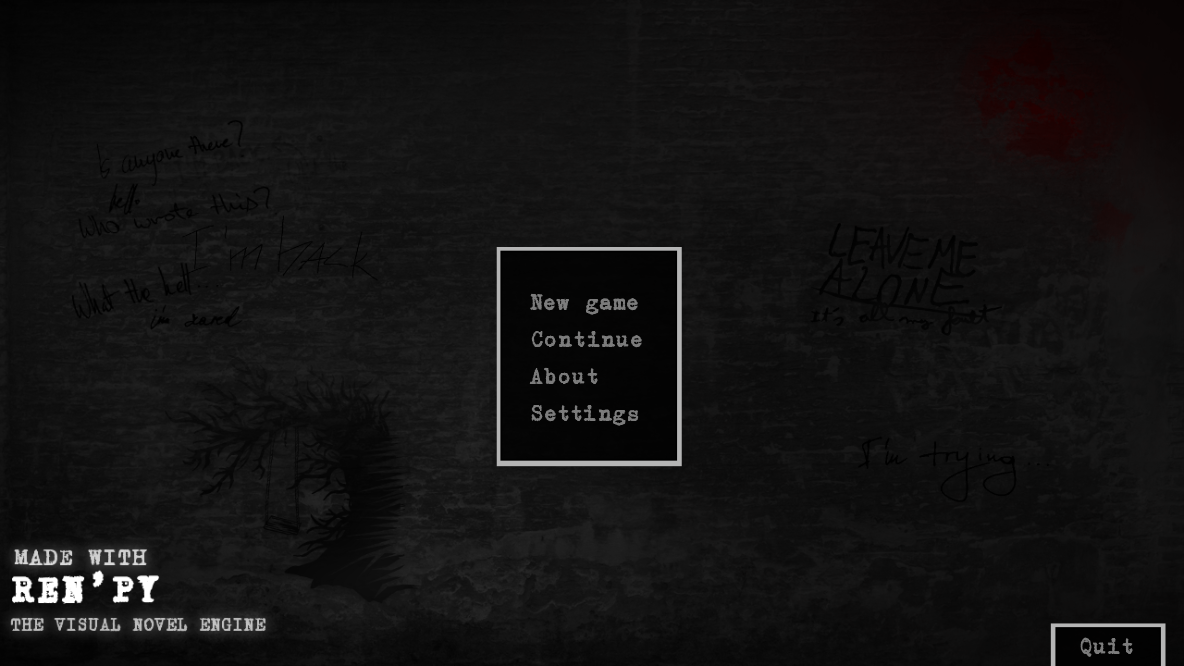 It was completely silent

When I play these old builds now, it's very jarring not to hear the main menu theme upon launch. Nowadays, I'm almost fed up with my game's music after hearing it for so long. But the silence is just... weird. I have no background in making music, I downloaded LMMS in March of this year and the next day I had the main menu theme. Since then, I'm trying my best to create something coherent and unique that would match the game's tone. And, often unintentionally, the soundtrack makes the game feel quite... different. I suppose that's something to be proud of. 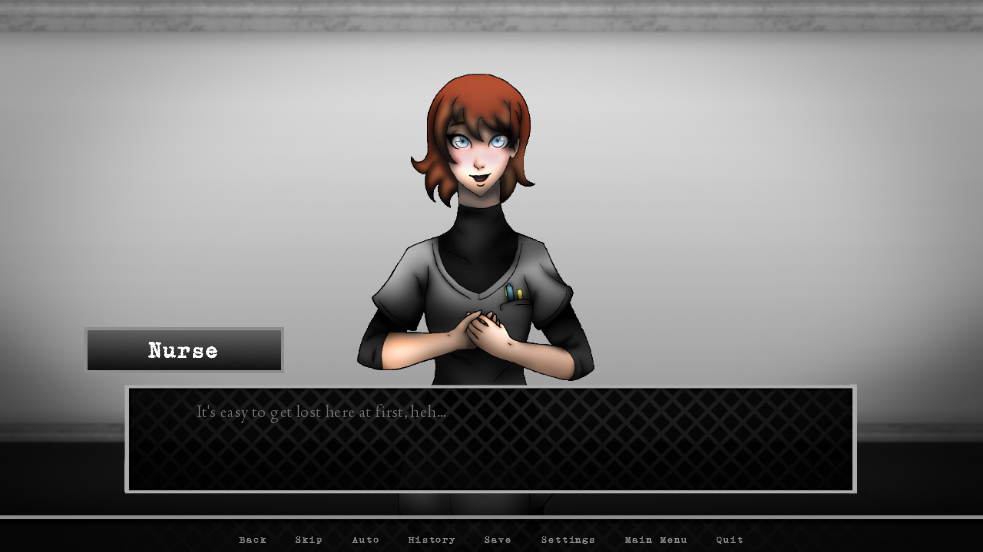 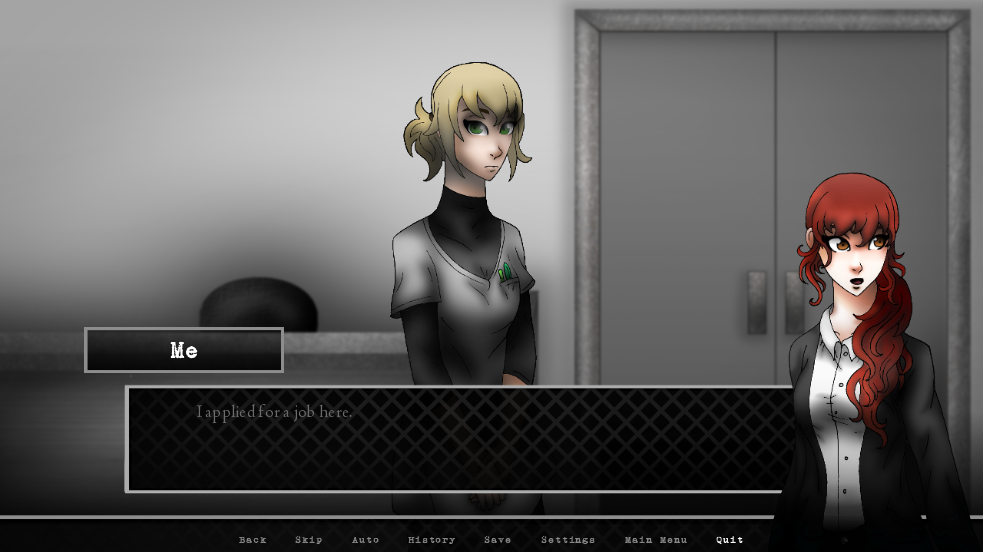 The graphics haunt me to this day whenever I look at them. Ouch. I don't know why, but when I look at my non-digital drawings from the same time, they don't look half as strange or unnatural as these sprites did. I'm still in the process of replacing old assets, because with every drawing I get better, but right now I'm replacing assets from less than a year ago - a year is a very long time where my drawing skills are concerned.

On top of that, the gui was very basic-looking. I think the direction I'm taking now with the game's graphics is the right one, and I hope to improve it even further by the next anniversary. 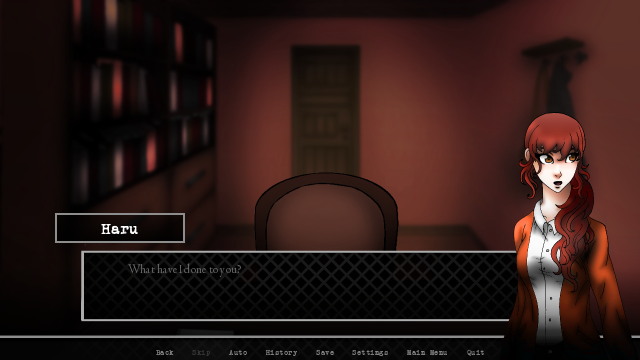 It was full of black screens and placeholder scenes

It's no surprise that many scenes weren't in place. In fact, when I play this old build, I'm surprised to see scenes already in place, rather than left out.

The things that build had were:

Anything else that is in the current demo was either completely abscent from the build, or replaced with single lines like "This is the second session with Charlie". 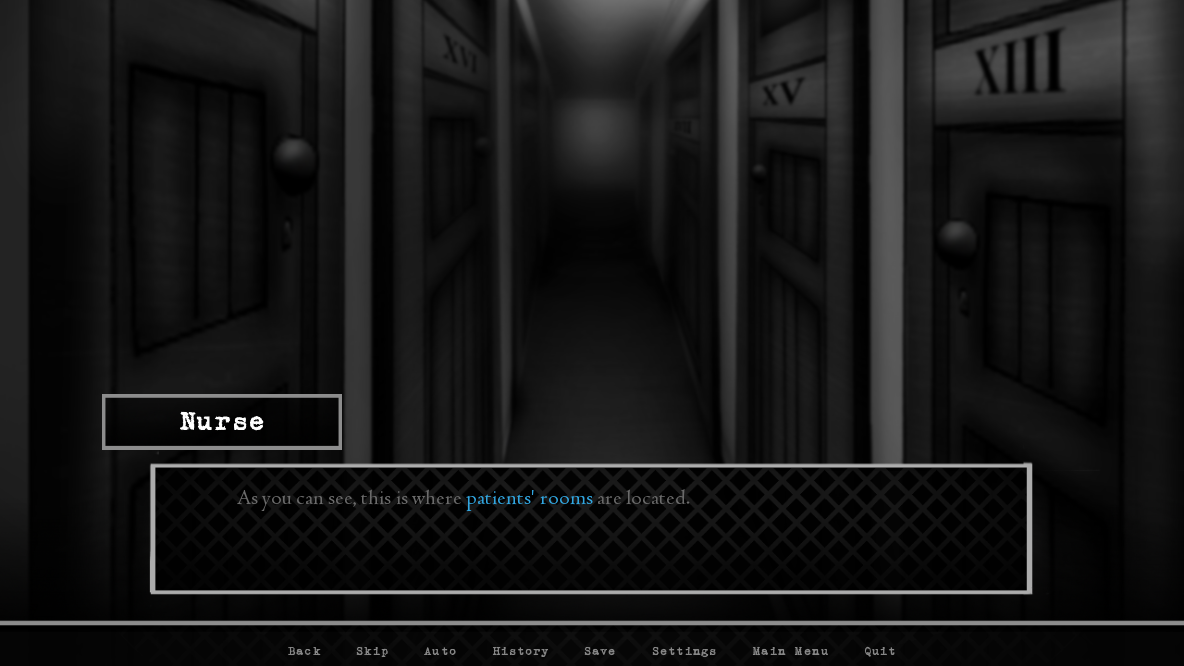 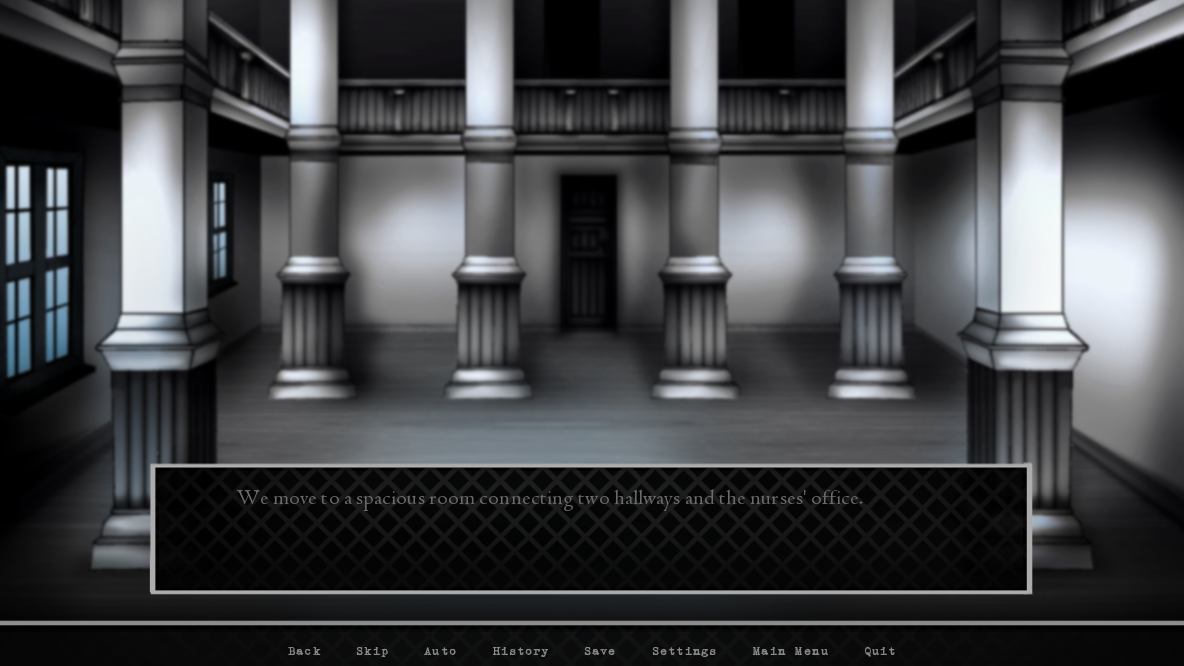 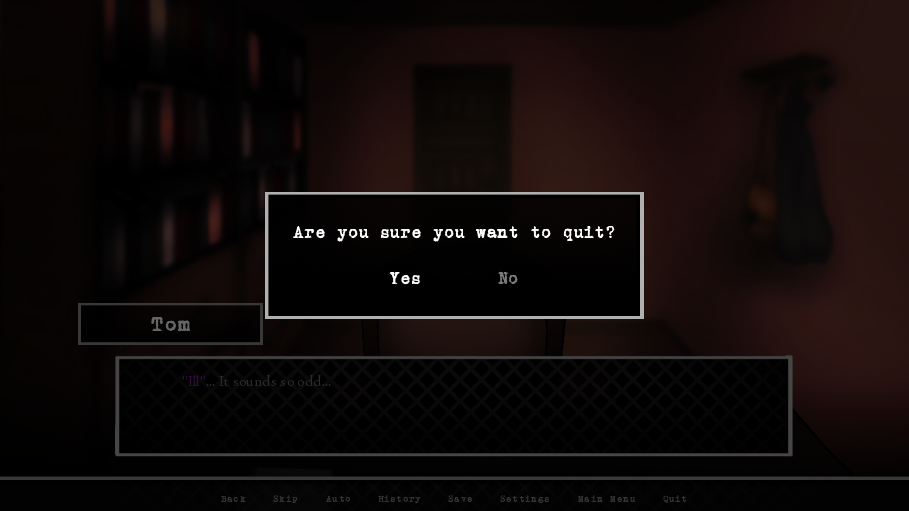 So what's the total progress made last year?

Now that you know roughly what that distaster of a build looked like a year ago, it's time to list everything I've done last year. Let's count.

It's hard not to feel proud when I look at this year's progress.

It's also hard to imagine how much quicker the game would progress if I commited to developing it full-time, but I know that's out of question for now. Development has slowed down a bit since summer, but I hope to keep up a steady pace this year. I might have a huge development update post for you after Christmas. I hope.

Either way, it's not going as slowly as I feared it would. I spent all of last weekend on the game's UI and the improvements were quite quick. I hope I'll be able to go back to Charlie and Elizabeth's routes, but I usually have so little time to spend on this game that I focus on the things I enjoy the most - this game is my whole free time, so I need to recover some sanity instead of forcing myself to rewrite long scenes and get frustrated over the lack of progress on Charlie and Elizabeth.

That said, I've been enjoying making this game a lot. Especially recently, being able to sit down and code a new menu or fix bugs has been very relaxing and interacting with the community on the game's discord server has been a great plus - it's very encouraging to see people interested in what I do and have players who can give me feedback.

Overall, making Absolution has been an amazing experience so far and I'm very grateful for all the attention it got. I'm very happy to see positive comments and reviews from players - it's a great feeling to see other people enjoy your content, especially when it's quite... out there.

When is the game coming out?

I think I can say now that I'm almost halfway done with it. However, I imagine towards the end it will get tricky - I will have to thoroughly test all of the game's endings, set up a promotional campaign before launch, implement endgame things like the achievement system, possibly hire voice actors. My estimate is another two years before the final game. I think it's a reasonable time frame for a game like this, being made by one person in their free time.

I nearly forgot about gathering funds (my bad)

I'll try to set up the ability to buy custom wallpapers on Itch.io to support the game financially in June of 2020. I hope it will help raise funds for partial voice acting, which I would love to have in the game. And it will be an opportunity for you to get exclusive Absolution-themed content. Stay tuned for the wallpapers, I might come up with something else as well until June 2020.