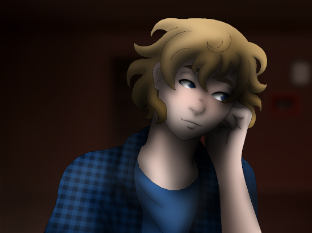 For a very long time, I've been mentioning wanting to redraw Charlie's sprites and finally it's become reality. I can finally look at him without going "I need to replace that sometime...", which was very distracting and prevented me from implementing his sprites on weeks 2 and 3, since I knew they'd be replaced soon and I'd have to go back and edit that with new facial expressions.

Now that I have his sprites (all 33 of them, as opposed to the previous 24), I can focus on implementing them into the rest of Act I, and that means I'm one step closer to completing his route. It also means I'll have to go back through his week 1 sessions to implement the new faces where they apply, but it shouldn't take too long. I've drawn two CGs recently, one a day, so I'm confident that my drawing speed has increased and that the CG for Charlie's route won't take too long. I still need to write the last two sessions with him, but they're already planned, so it shouldn't be too difficult (I guess I'm just waiting to be in the right mood for writing, I don't want to force it) and in the meantime I'll try to implement music and graphics into all the sessions already in-game. It's tedious work (that's mostly why I tend to put it off until the last second), but hopefully it won't take too long.

I'm generally ready to focus on Charlie's route (unless I decide to update Tom's third alter's sprite - I recently drew a CG he's on, so I might do it, because they are a bit old at this point), and as long as I'm focused, it'll be done shortly.

School is still cancelled, but there's online lessons from time to time - I might have less free time, but I still have most of the day to myself, which means my speed won't be affected as much as I feared it might be. I hope all of you are staying safe and at home, if you can.

Expect more updates from me soon ~

I just uploaded all the tracks you can hear in the demo to the downloads page as a convenient .ZIP file.