A downloadable visual novel for Windows and Linux

This game is not in development anymore. Check out my current, original project here:

"Lonely Souls" is an otome visual novel game based on Yandere Simulator. It is an adaptation of a fanfiction which you can find here:  fanfiction.net. Both the game and story were created by Navypink.

Oka Ruto, the Occult Club's founder and leader.  She was always considered an outcast among her fellow students, who often called her "weird" or "creepy"....

Ona day, on a Monday morning which seemed completely average at the beginning, while walking to school Oka meets Taro Yamada, her classmate. She then learns that his best friend has mysteriously disappeared over the course of the last week, and nobody knows what happened to her. And she can't help but feel sorry for his loss. Maybe, she even begins to grow.... fond of him.

What of her club, though? Her friends, everything that she cared about for the past year or so, she can't just let them go. She has to make a choice - spend time with Taro, or stay loyal to her friends. Or perhaps she will become a loner, deciding not to spend time with anyone else?

Soon, frienship is going to become the least of Oka's problems as she starts having strange and horrifying visions she can't explain, and more people start to disappear from her school.....

Yandere Simulator and all of its characters belong to YandereDev, this is a completely non-commercial fangame. The school backgrounds and music for this game come from Yandere Simulator.

If you're interested in seeing a full walkthrough of the game, a youtuber named WitchAngelNekora did a great job going through Taro's route and a few other endings. Here're the links to her videos.

In order to run the game, you must unzip the file that you downloaded. Then open "Lonely Souls.exe" to run the game. Once you see the main menu, it is recommended that you check the settings and help sections out, as they may be quite useful to you.

can you make a christmas update for once?

Ummm, I'm not sure how it would work.

I'm sorry. I was planning a small update to celebrate the game's next anniversary, but I'm currently working on my own project. If you liked this game, feel free to play my current one.

It's the old night theme of Ayano's bedroom. It hasn't been in the game for a while, but I'm sure you can still find it on the internet

Thanks for the comment, I hope you're looking forward to my next game ~

Just try it on PC then, if that's the only thing that works. Thanks for being so determined to play my game despite the errors <3

Im on mobile and the all zip file I can open it but can't run the exe or game. I need just the  Android only Apk. Im on Motorola e5 Crusie -Sorry for my bad spelling-

I think that's a broader issue than with just this game, I don't know about mobile phones but maybe you'll find a solution there:

I hope this helps

its so good drawn! its really nice. love it :)) 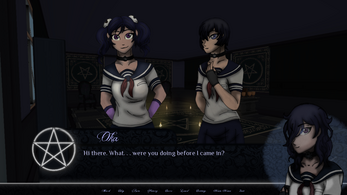